3 Arrested By Mumbai Cops For Clubhouse Chat On Torturing Women

Gibberish posts made by the official Twitter handle of the Ministry of Information and Broadcasting appeared on its timeline this morning, indicating the account may have been compromised.

The posts – all of them about Tesla boss Elon Musk – disappeared about half-an-hour after they first appeared.

It also retweeted a post by Elon Musk’s verified handle that criticised a solar tax move in California.

“Bizarre anti-environment move by government of California,” Elon Musk had tweeted, which the hacked handle of the I&B Ministry retweeted.

The ministry has not commented on the incident yet, though the posts have been removed now. 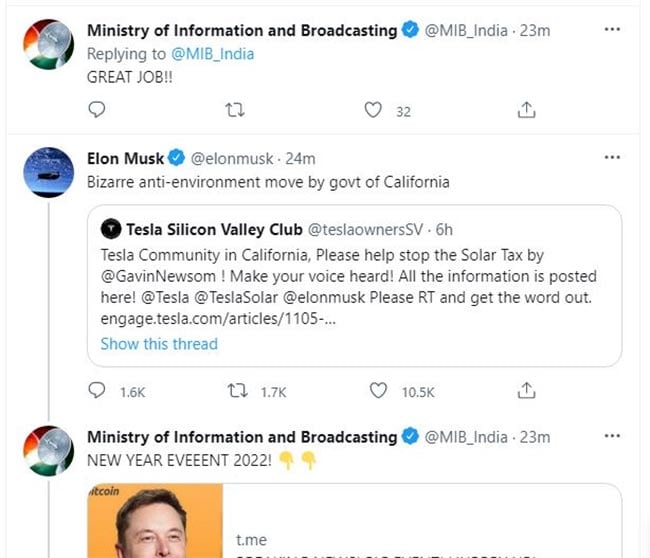 Last month, Prime Minister Narendra Modi’s Twitter handle was briefly hacked, and a tweet claiming that India has “officially adopted bitcoin as legal tender” was put out from it.

The Prime Minister’s Office later said the account was immediately secured after the matter was escalated to Twitter.

In July 2020 more than 100 famous accounts were breached including those of Barack Obama, Joe Biden, Bill Gates, Elon Musk, Kanye West and Apple Inc. Once they got access, the attackers went on to promote a Bitcoin scam to millions of these victims’ followers.