With 11 dismissals in the ongoing three-match Test series, Mohammed Shami is India’s highest wicket-taker and is also five wickets away from a big milestone against South Africa. With the series level at 1-1, both sides face each other in the deciding third Test starting on Tuesday and Shami has the opportunity to become the fifth Indian bowler and second Indian pacer after Javagal Srinath to register 50 Test wickets against the Proteas. If he achieves the feat, he will be joining an illustrious list consisting of Anil Kumble, Srinath, Harbhajan Singh and Ravichandran Ashwin.

Legendary spinner Kumble has registered 84 Test wickets vs South Africa and Srinath bagged 64. Meanwhile, Harbhajan has taken 60 wickets and Ashwin has 56 Test dismissals against the Proteas.

It won’t be a surprise for fans, experts if Shami reaches his milestone as he has taken 45 wickets in 10 Tests against South Africa, which is the most dismissals for him against any team in his career.

His second-highest wicket tally is against West Indies with 33 dismissals, followed by 31 scalps vs Australia. 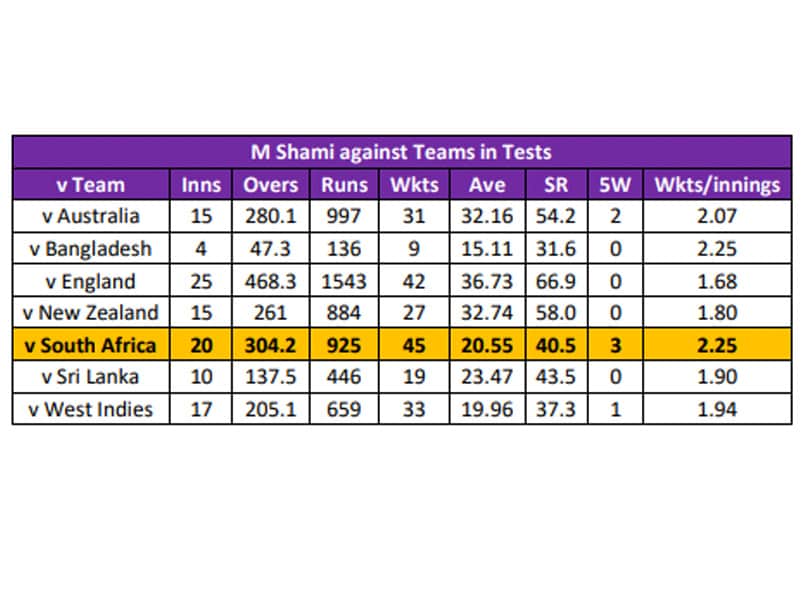 It is also worth noting that Shami’s 40.5 bowling strike rate against South Africa is the best by a bowler in this century with minimum 300 overs bowled.

With Virat Kohli returning for the third Test, the visitors will be aiming to win the series. The match will take place in Cape Town.

Kohli was out of the second Test due to an upper back spasm. India lost the match by seven wickets.

Topics mentioned in this article

The Lieutenant Governor has agreed to recommendation to allow 50% attendance in private offices.File New …