Amid Covid, No Foreign Head Of State As Chief Guest This Republic Day: Report

Did the Health Ministry pull the wool over the eyes of the Election Commission last Thursday (January 6) when the commissioners went for a briefing? Did they cleverly present data that Covid infections in the states about to vote are as low as 0.5%, that there is nothing to worry about and that the commissioners could go ahead with the elections as is?

The answer is probably yes.

Yes, not because what the Health Ministry said was untrue, but that it was put together to present a picture of Covid normalcy in the election states.

The Health Ministry, according to all reports, stated that in these five states the overall positivity was a mere 0.5% for data on January 5 (which actually means cases reported on January 4).

First, the data of Jan 5 (which reflected Jan 4) was considerably lower than what was available on the morning of the meeting. In UP, Goa and Manipur, the numbers had doubled and in Punjab and Uttarakhand, they were 80% and 60% higher. There was a clear trend from January 1 of cases rising rapidly and the ministry had enough reference points from Mumbai, Delhi and Karnataka to be able to project what was coming.

Second, the Election Commission had access to the daily data, as we all do, which, by the morning of Saturday (Jan 8) showed that UP had seen an increase of 437% from Jan 5 and all other states were close to a 300% increase. In fact, by Saturday UP was reporting that the positivity rate was at 3.46% (4) compared to 0.24% presented to the Election Commission.

Third, why was the Election Commission depending on the numbers given by the Health Ministry? The Health Ministry had indicated it had no positivity rates for Goa, while Goan newspapers were reporting positivity rates of 17-24% during this period. Given that the EC has state election officers, why wasn’t it relying on reports from them on what was the situation on the ground?

Punjab on Jan 6 (data available on Jan 7) had a positivity rate of 11.75%. That information wasn’t a secret, so why didn’t the Health Ministry send the Election Commission an update?

In fact, instead of sending an update and warning the Election Commission of an impending crisis in all the election states, the Health Ministry sent out a robust defence, stating that media reports about it saying there was no cause for alarm were “highly ill-informed” and were meant to “start a misinformation campaign”. It added that its presentation was on the “global and domestic status of the spread of Covid”. It did not, of course, bother to share the presentation for the larger public to verify what it had said. That is not surprising – they seldom share information on issues that could lead to any sort of debate.

The real question that arises is given that cases were (and are) rising exponentially, why was the EC in such a hurry to have the polls? Almost all data available seems to suggest that the third wave is currently in the growing phase and data from other countries would indicate that there is a 4-6 week rise and a similar decline. So right now, all these states are in the growth period and should peak some time between early and mid-February, except UP, which may be a couple of weeks later.

Punjab, Goa, Uttarakhand and Manipur have till March 15 to form new assemblies, Business Standard noted in an editorial today, so why push them into elections in February when Covid is peaking, especially as they have to wait for the result until March 10?

And Uttar Pradesh doesn’t need the new assembly to be called until May 14. So why couldn’t that election be held in April? 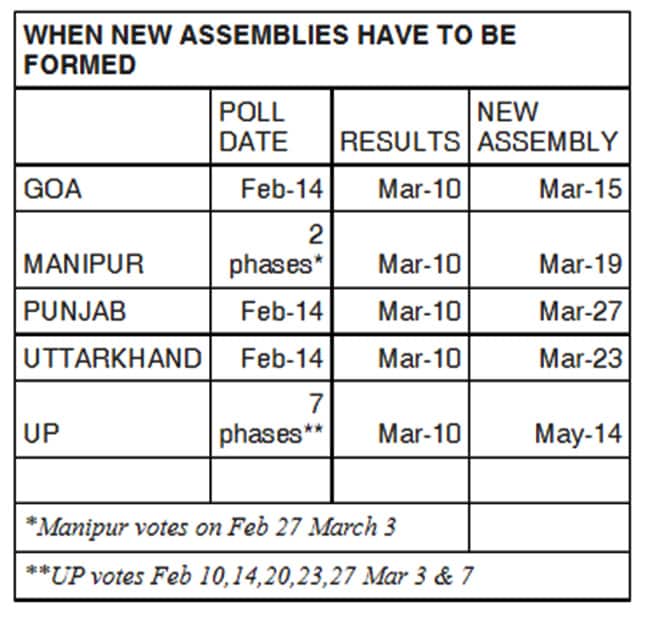 The Health Ministry seems to be seriously concerned about the third wave and that the demand for hospitalisation could rise considerably, and today authorised the deployment of resident doctors and nursing students as support during the wave.

One wishes it had reacted like this last week – then voting in each state could have started 30 days later and the deadline for formation of the next assembly would still have been met. Thirty days in the time of a Covid wave is like a breather that the states could have afforded. Sadly, many ordinary people, party workers, polling officials, security personnel and voters will be forced together and unnecessarily face the additional risk of Covid over the next two months.

Disclaimer: The opinions expressed within this article are the personal opinions of the author. The facts and opinions appearing in the article do not reflect the views of NDTV and NDTV does not assume any responsibility or liability for the same.

Previous ‘Concerned’ by Beijing’s attempt to intimidate its neighbors, says US ahead of India-China military talks
Next “Never Been Close To…”: Marnus Labuschagne And Steve Smith Indulge In Hilarious Banter On Twitter | Cricket News

BJP To Fight UP Polls With Apna Dal, Nishad Party, No Seat-Share Deal Yet

UP votes over seven phases of polling that begin February 10, with results due on …